Tickets go on sale on Friday, June 16 at 10 a.m. exclusively through WellsFargoCenterPhilly.com, by phone at 1-800-298-4200 or in person at the Wells Fargo Center box office.

Harry Styles Live On Tour is in support of Styles self-titled debut album, which was released on May 12 and soared to the top of the charts around the world. In the U.S. it topped the Billboard 200 album chart with over 230,000 equivalent album units sold and 193,000 traditional albums sold, making history as the biggest debut sales week for a U.K. male artist’s first full-length album since Nielsen Music began tracking sales in 1991. The U.S. record debut comes hot on the heels of Style’s massive international success where the album hit #1 in over 55 countries, including the U.S., U.K., Ireland, Canada, Australia, Spain, Mexico, Brazil, Holland, Belgium, Poland and across Latin America, South East Asia and the Middle East. 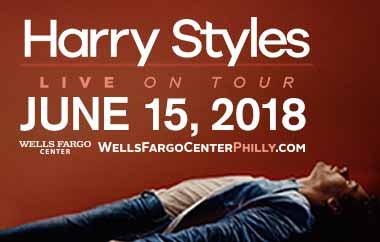