The performance will feature a unique repertoire from Bocelli’s Grammy-nominated album, Cinema, special selections from the 20th Anniversary of the release of Romanza, along with the traditional selection of Arias, love songs, and crossover hits. Bocelli will be joined on stage by Eugene Kohn, soprano Larisa Martinez, and special guest, Broadway sensation Heather Headley.

Bocelli will perform with the largest standalone pops orchestra in the United States, the Philly POPS. Now in its 38th season, the Philly POPS orchestra serves a consistently growing audience of over 100,000 annually.

“In 2015, having the Philly POPS perform with Andrea Bocelli felt like a once-in-a-lifetime opportunity and the concert was thrilling,” said Frank Giordano, Philly POPS President and CEO. “We’re honored and excited to share the stage with one of the world’s great talents once again.”

Bocelli has been thrilling audiences for over 20 years, and has sold over 80 million albums worldwide. In 2016, he was nominated for three Latin Grammy Awards including “Album of the Year,” and received a 2017 Grammy Award nomination for “Best Traditional Pop Vocal Album” for Cinema. 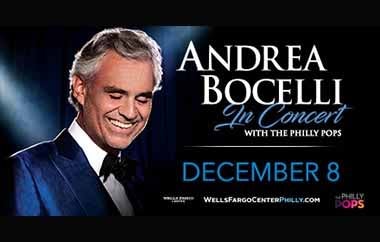