Today Dude Perfect – Tyler Toney, Cody Jones, Garrett Hilbert, and twins Coby and Cory Cotton – announced The Dude Perfect 2020 Tour which includes a stop at Wells Fargo Center on Saturday, June 27, 2020. The YouTube sensations hit the road for their first-ever live tour this year, completely selling out all 20 of their arena dates this summer.

“After incredibly positive feedback from the fans who completely sold out our first ever tour, we’re back this summer better than ever in even larger arenas,” said Coby Cotton. “With new competitions, more comedy, and all the excitement and action you’d expect from us here at Dude Perfect, we know that the 2020 Dude Perfect Tour will be your family’s favorite memory of the summer.”

In their second live tour, the fans will experience the Dudes up close and personal when they bring the action right into the audience with crazy stunts, competitive battles, some of their most funny and embarrassing stories, outlandish stereotypes (maybe an appearance from the rage monster) and several of their most popular segments from their award-winning Overtime series like Cool not Cool and Wheel Unfortunate with Ned Forrester.

Currently in the midst of Transformation 2020, a multi-year $265 million renovation initiative, Wells Fargo Center is reinventing the live event experience for every fan that walks through its doors. To learn more about Wells Fargo Center visit www.wellsfargocenterphilly.com or follow us on Twitter, Facebook, and Instagram. 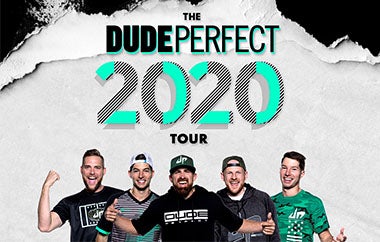