Grammy Award®-winning band Bon Jovi is set to rock Philadelphia with a This House is Not For Sale Tour stop at Wells Fargo Center on Friday, March 31. Bon Jovi last performed in Philadelphia at the Liacouras Center on November 21, 2013.
Tickets will go on sale on Saturday, December 10 at 10 a.m. exclusively throughWellsFargoCenterPhilly.com, by phone at 1-800-298-4200 or in person at the Wells Fargo Center box office.

The This House Is Not for Sale Tour is Bon Jovi’s first outing since the band’s 2013 Because We Can World Tour, which was their third tour in six years to be ranked the #1 top-grossing tour in the world (a feat accomplished by only The Rolling Stones previously). Bon Jovi’s touring legacy was recently recognized on Nov. 9th at the 2016 “Legend of Live” award at the Billboard Touring Conference & Awards.

Bon Jovi launched This House Is Not for Sale on Nov. 4 which debuted atop the Billboard 200 chart, giving the rock band its sixth No. 1. The title track reached the Top Ten of the AC Radio Chart – it is Bon Jovi’s highest debut on that chart to date. This House Is Not for Sale is Bon Jovi’s first major release since What About Now (2013), the band’s 3rd consecutive multi-platinum album to debut at No. 1 on the Top 200 (Lost Highway in 2007, and The Circle in 2009). 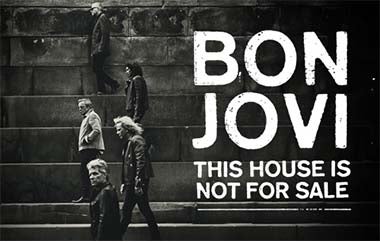