Comedian Amy Schumer is set to perform live at Wells Fargo Center on Saturday, September 24 as part of her 50+ city world tour.

Tickets will go on sale on Tuesday, June 28 at 10 a.m. exclusively through WellsFargoCenterPhilly.com, by phone at 1-800-298-4200 or in person at the Wells Fargo Center box office.

Schumer is one of the entertainment industry’s leading forces as a standup comedian, actress, writer, producer and director. She is the creator, star, writer and executive producer of the award winning Inside Amy Schumer, for Comedy Central.

Additionally, she won the Critic’s Choice Award for “Best Actress in a Comedy” and was nominated for a Writers’ Guild Award in the category of “Original Screenplay.”

Her one-hour HBO comedy special, Amy Schumer: Live at the Apollo directed by Chris Rock, premiered on October 17th, 2015 and was HBO’s most watched Saturday night comedy special debut since December 2009. The special earned her a Writers Guild nomination for Best Comedy/Variety Special. 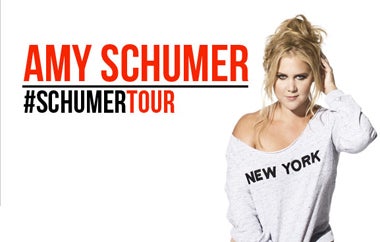