Tickets go on sale on Friday, May 18 at 9 a.m. exclusively through WellsFargoCenterPhilly.com, by phone at 1-800-298-4200, or in person at the Wells Fargo Center box office.

The fall leg of the tour comes on the heels of an already incredible year for Maniscalco. In February he released his first book “Stay Hungry,” for Simon & Schuster making the national best-sellers list. He also hit the road on the Stay Hungry 2018 Tour with 50 shows.

Maniscalco is also set to expand his major motion picture portfolio to include roles in “TAG,” out June 15, starring alongside Jon Hamm, Ed Helms and Jeremy Renner as well as “Green Book” with Oscar-winner Mahershala Ali, Linda Cardellini and Viggo Mortensen. In 2019, Maniscalco will join a star-studded cast that includes Robert DeNiro, Al Pacino, Joe Pesci and more in Martin Scorcese’s upcoming film “The Irishman.”

Maniscalco was included on Forbes’ 2017 list of “The World’s Highest Paid Comedians” where they praised, “thanks to his enthusiasm and willingness to work, Maniscalco will likely continue to be on Forbes’ list for years to come.” Dubbed “one of the hottest comics” by Newsday and “one of the funniest comics working stand-up today” by Esquire, Sebastian’s live performance has become a critically-acclaimed event, with the Los Angeles Times raving, “onstage, there’s an impatience to Maniscalco’s delivery as well, a hair-trigger exasperation with people and modern life, punctuated with baffled expressions, percussive thumps on the microphone and wide-swung leg kicks more associated with an Olympic speed-skater than a stand-up comic.”

Instead of asking questions – a theme that has served as the foundation of his previous comedy specials and shows like What’s Wrong with People?, Aren’t You Embarrassed? and Why Would You Do That? – Maniscalco’s new tour has the affable performer instead encouraging fans to follow in his footsteps and “stay hungry.” 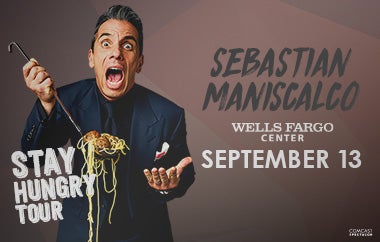