Due to high demand, U2 is set to bring a second eXPERIENCE + iNNOCENCE Tour stop to Wells Fargo Center on Thursday, June 14.  This is in addition to the Wednesday, June 13 performance.

Tickets for the June 14 concert go on sale on Monday, December 4 at 10 a.m. Fans wishing to purchase U2 tickets to the second Philadelphia performance will need to register by Tuesday, November 28 at 10pm PST at u2.tmverifiedfan.com. Registration is free and easy and has been effective in making sure that true fans have access to tickets at face value.

Songs of Experience, the 14th studio album from U2, will be released December 1, 2017 by Interscope Records in the U.S. and via Universal Canada on CD, vinyl, digital download and across streaming platforms.

Just as Songs of Experience serves as a companion piece to 2014’s Songs of Innocence, the eXPERIENCE + iNNOCENCE Tour will serve as a sequel to 2015’s iNNOCENCE + eXPERIENCE Tour which saw “U2 reinvent the arena show” (Rolling Stone) and was named the No. 1 concert of 2015 by The New York Times.

Pre-order of Songs of Experience is available now across all digital platforms and will include three instant grat songs: The previously unreleased "Get Out of Your Own Way,” first single "You’re The Best Thing About Me" which was released on September 6th, and the album version of “The Blackout,” previously released as a performance video in August.  All three songs are available now to stream across all platforms. Fans who pre-order the deluxe version of the album will also receive the Kygo remix of “You’re The Best Thing About Me.”

In addition to unveiling album artwork by Anton Corbijn, U2 has revealed the final tracklist of Songs of Experience, which was completed earlier this year. The lyrical approach of the album was greatly inspired by Irish poet, novelist and Trinity College, Dublin Professor Emeritus Brendan Kennelly’s advice to Bono to “write as if you’re dead’, resulting in a collection of songs in the form of intimate letters to places and people close to the singer’s heart - family, friends, fans, himself.

Songs of Experience is the companion release to 2014’s ‘Songs of Innocence’, the two titles drawing inspiration from a collection of poems, Songs of Innocence and Experience, by the 18th century English mystic and poet William Blake. Produced by Jacknife Lee and Ryan Tedder, with Steve Lillywhite, Andy Barlow and Jolyon Thomas, the album features a cover image by Anton Corbijn of band-members’ teenage children Eli Hewson and Sian Evans. The full track listing for the album is:

1. Love Is All We Have Left

3. You’re The Best Thing About Me

9. The Little Things That Give You Away

12. Love Is Bigger Than Anything in Its Way 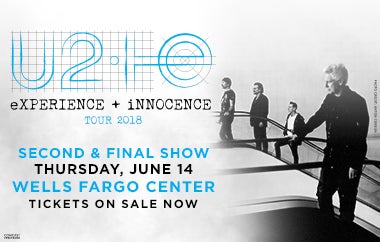