Due to overwhelming demand, Cher, the legendary multi-award winning entertainer, has extended her Here We Go Again tour to include a second performance at Wells Fargo Center on Friday, December 6.

Tickets for the December 6 event will go on sale Friday, April 5 at 11 a.m. online at WellsFargoCenterPhilly.com, by phone at 1-800-298-4200, or in person at the Wells Fargo Center box office.

Cher’s Here We Go Again tour, her first across the U.S. in more than five years, has received rave reviews from sold-out crowds at every stop since early January.  Fans throng to hear Cher’s biggest hits plus songs from her recent Dancing Queen album – a tribute to the music of ABBA.

Cher, an Oscar, Emmy, Cannes Film Festival and Grammy Award-winning icon was recently honored at the Kennedy Center in 2018.  She is co-producer of The Cher Show, the hit Broadway musical.

Nile Rodgers is a multiple GRAMMY-winning composer, producer, arranger and guitarist and co-founder of CHIC. Rodgers pioneered a musical language that generated chart-topping hits like “Le Freak,” (the biggest selling single in the history of Atlantic Records!) and sparked the advent of hip-hop with “Good Times”. Nile Rodgers transcends all styles of music across every generation with a body of work that’s garnered him inductions into the Rock & Roll Hall of Fame  in 2017 and the Songwriters Hall of Fame in 2016. 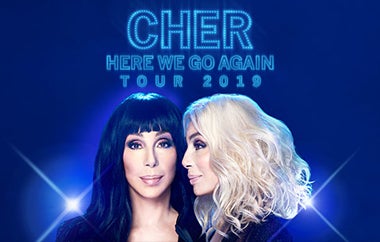