After a rousing start to his Double Down Tour, Eric Church announced 13 added shows, including two unique performances at Wells Fargo Center on Friday, October 11 and Saturday, October 12.

Tickets for both Philadelphia shows go on sale Friday, March 22 at 10 a.m. through WellsFargoCenterPhilly.com or phone at 1-800-298-4200 and will be available via mobile delivery only.

Earlier this week, the ACM Album of the Year nominee told his fans “I don't want to be two months from the end of this thing - so we're going to play a little more... I can't thank you enough for what this is and what I'm seeing every night. I appreciate everybody giving me everything they've got and I look forward to seeing you on the road!”

Church has set a new standard for touring with his back-to-back stands in each city of the Double Down Tour. In addition to unique set lists, each night of the tour has also seen elements specific to the host locations themselves. Church’s references to local venues he played in his earliest days and tribute-filled medleys have won over the local crowds.

The three-time Country Music Association and six-time Academy of Country Music Award winner released his highly-anticipated album Desperate Man atop the Billboard Country Albums chart on October 5. The album also debuted at No. 5 on the all-genre Billboard 200. Rolling Stone describes the album as “classic Church: expertly crafted and country-radio-friendly, while also pushing boundaries in a way that sounds natural and unforced” and American Songwriter notes that it “sublimates the pain of a tumultuous year into his most adventuresome album yet.” Church has returned to the road for his 2019 Double Down Tour, visiting more than 25 markets for back-to-back nights of two unique shows sans-opening act to give fans 6+ hours of his iconic music in each city. The tour also includes a massive stop at Nissan Stadium in Nashville where Church will more than double the attendance record set at Bridgestone Arena in 2017. 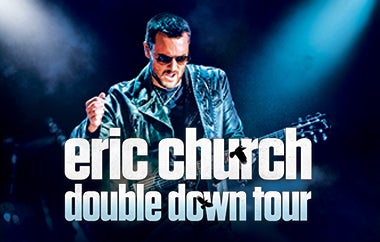