Freestyle Explosion Is Back At Wells Fargo Center On Saturday, July 23 2022

What a line up! The biggest names in freestyle music  including The King of Freestyle Stevie B., The Queen of Freestyle Lisa Lisa , Female Pop Sensations Expose,    The Cover Girls, and Pretty Poison plus  Throwback Legends Tag Team, Montell Jordan and 69 Boys and Freestyle icons TKA  collaborate to perform their biggest rhythmic dance hits during the “FREESTYLE EXPLOSION THROWBACK JAM t” at WELLS FARGO Center on Saturday, July 23, 2022 at 7:30 pm

Tickets will go on sale this Friday, March 25 at 10:00 AM exclusively through www.WELLSFARGOCENTERPHILLY.com.

This lineup influenced the 80’s with their style and pop music of which remains widely popular and in rotation with today’s hits.

Singer, songwriter and producer STEVIE B. who was influential in the Latin freestyle music scene of the late 1980’s, is best known for his No. 1 ballad “Because I Love You” as well as party jams “Spring Love” and “Party Your Body” and other hits “I Wanna Be The One” and “Dreaming of Love".

Lisa Lisa rose to fame with the certified Gold single, “I Wonder If I Take You Home,” which was released along with her band Cult Jam and huge follow up hits such as “Can You Feel The Beat”, "Head To Toe”, “Lost In Emotion” and the smash ballad "All Cried Out".

American vocal group, Exposé achieved much of their success in the late 80’s and early 90’s when they became the first group to have four Top Ten hits on the Billboard Hot 100 chart from their debut album including their No. 1 single “Seasons Change”. Their other major hits include “Point of No Return”, “Come Go With Me” and “Let Me Be the One”.

The Cover Girls  are a favorite New York based Freestyle group who achieved chart success in the late 1980’s and early 90’s with hit songs “Show Me”, “Because of You" “My Heart Skips a Beat” and We Cant Go Wrong" This will be their first time back in Orlando in almost 5 years.

Recording Artist and Miami native Connie is best known for her Freestyle hits “Funky Little Beat” and “ Rock Me.” Both hit songs reached the top positions on almost all Freestyle Charts and she remains today as one of Freestyle's favorite performers and stars.

TKA is the still one of the best-selling Latin freestyle band in history. The group comprising a trio was prominent in the 1980s and early 1990s, particularly in New York City, Chicago, Miami, Philly and Orlando. Original members  Louis "Kayel” Sharpe(K7), and Ralph "Aby" Cruz—are still performing together on their big hits “One Way Love”. “Maria” “Tear’s May Fall” and Come Baby Come".

Lil Suzy is regarded as one of the top freestyle singers and was best known for the club hit "Take Me in Your Arms"  which charted on the Billboard Hot 100 in 1992 (when she was 13 years old) and was named Billboard magazine's Best New Dance Artist that year, making her the youngest artist ever to receive the honor.

Lisette Melendez is certainly one of the the tours most powerful Latin pop/dance-pop singers. She is best known for her 1991 hits "Together Forever",  and "A Day In My Life (Without You)”  Both songs were such big dance music hits that they are credited as helping renew interest in Freestyle music in the early 1990s.

Pretty Poison- Philly’s own American dance group led by the beautiful are Jade Starling  and backed up Whey Cooler (keyboardist and guitarist); and Kaya Pryor (percussionist).

Tag Team is an American hip hop/pop rap duo from Atlanta, Georgia. They are best known for their 1993 single "Whoomp! (There It Is)", which has appeared in a number of advertisements, films, and TV shows and most recently in the  GEICO and SCOOP THERE IT IS TV campaigns….These  guys back definitely back  in the limelight. The duo is made up of Cecil Glenn (DC the Brain Supreme) and Steve Gibson (Steve Rolln). They put on an unbelievable high energy show!!

Montell Jordan will have everyone dancing to his  1995 No. 1 hit "This Is How We Do It,"  The single reached No. 1 on the Billboard Hot 100 and remained there for seven consecutive weeks. Thanks to the enormous success of the single, Jordan's first album went platinum, selling millions of copies.

69 Boyz- Who had the  Number one Party Jam “Tootsie Roll” is an American Miami bass and hip hop duo: Van "Thrill Da Playa" Bryant, from Jacksonville, Florida, and Barry "Fast" Wright, from Orlando, Florida, United States.  These guys will bring energy to the show like no one else!!

Tickets can be purchased at WELLSFARGOCENTERPHILLY.COM. For more information please visit   FREESTYLEEXPLOSION.COM. 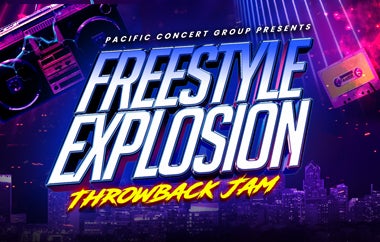