Tickets will go on sale on Friday, July 1 at 10 a.m. exclusively through WellsFargoCenterPhilly.com, by phone at 1-800-298-4200 or in person at the Wells Fargo Center box office.

“The Buffet Tour” is one of R. Kelly’s most entertaining shows to date. “The Tour of the Century” finds the King of R&B performing all his greatest hits accompanied by a live band, dancers full production and many surprises including songs his fans have never seen performed live before.

“I’m extremely excited to head back on tour and see all of my amazing fans,” says R.Kelly. “‘The Buffet Tour’” is one you don’t want to miss, I’ve changed everything for this show including the stage setup- plus the production is crazy.”

R. Kelly released his highly anticipated 13th solo studio album The Buffet on December 11, 2015. The album includes his hit summer jam “Backyard Party” and his latest single “Wake Up Everybody.” The Buffet is a musical smorgasbord with sounds ranging from R&B to pop to blues and even country. R. Kelly adds his signature soulfulness to make each song uniquely his own while giving fans an eclectic taste of his musical influences.

Lauded as an R&B legend, R. Kelly is one of the most successful artists of all time with over 40 million albums sold worldwide, 3 Grammy Awards, 6 American Music Awards, 6 Billboard Awards, and 8 Soul Train Music Awards.  His chart-topping hits range from “Bump N’ Grind” and “Your Body’s Callin” to Grammy Award winning “I Believe I Can Fly” and everything in between.  In addition to recent collaborations with Lady Gaga (“Do What U Want”), Justin Bieber (“PYD”), and Bruno Mars (“Gorilla” remix),  R. Kelly has scored hit songs for Michael Jackson (“You Are Not Alone”), Celine Dion (“I’m Your Angel”), Maxwell (“Fortunate”) and countless others. With a music career spanning over 25 years, R. Kelly has proven time and time again he is the “King of R&B.” 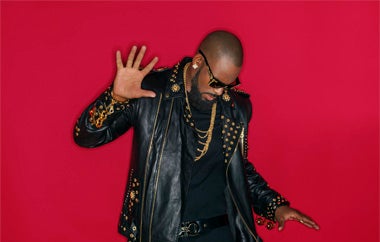