The tour, promoted by AEG Presents, kicks off in San Diego at Pechanga Arena on Friday, February 18, 2022, and will make a stop at Wells Fargo Center on June 16, 2022. The tour will also hit New York City, Chicago, Los Angeles, Miami, Toronto and many more. Full tour routing is below. Tickets are available now at justinbiebermusic.com.

As the official wireless partner for the Justice World Tour, T-Mobile and Justin Bieber continue their successful partnership, forged in 2017 with their #UnlimitedMoves Super Bowl campaign. T-Mobile customers can get access to stage-front tickets at every U.S. tour stop, even the sold-out shows! Un-carrier customers can snag their Reserved Tickets starting 30 days prior to each show at first day prices – just another way T-Mobile thanks its customers simply for being customers.

As part of the Justin Bieber World Tour, fans can enter for a chance to win an instant upgrade to VIP seating or a trip to meet Justin by taking action on Propeller to transform the criminal justice system with REFORM Alliance, fight climate change with NRDC, and support other important causes. The more actions a fan completes, the more they increase their chances of winning. Together, we can create tangible change.

A limited number exclusive VIP Packages are also available. These exceptional offers can include an amazing selection of reserved seated tickets, custom merchandise and much more.

Additionally, $1.00 from each ticket purchased will be donated to the Bieber Foundation which is committed to supporting causes that embody justice in action.

Justin returns to the road on the heels of the global #1 album Justice, his eighth album to debut at #1 on the Billboard 200. Bieber made history as the first male solo artist to debut at #1 on both the Billboard 200 album chart and Billboard Hot 100 singles chart with his certified-platinum smash hit “Peaches.” With over 75 billion career streams and over 70 million albums sold worldwide, Justin continues to reign as one of the biggest artists in the world. Bieber is the #1 artist on YouTube with over 60 million subscribers worldwide and is the #1 artist on Spotify global with over 75 million monthly listeners. Justice has garnered over four and a half billion streams worldwide since its release in March.

Jaden is a multi-hyphenate musician, actor, entrepreneur, fashion designer and activist. The artist just released enhanced album CTV3: Day Tripper's Edition in August of 2021. The album features a new track list as well as spatial audio capabilities on select platforms. Consisting of 19 tracks, the album includes singles “Summer” and “BYE,” as well as focus track “Still In Love.” It also features Australian rock band Babe Rainbow on “Our Psychedelic Love Story” and artists Joey Bada$$ and Raury on “Endless Summer Remix.” His third full-length album project, CTV3: Cool Tape Vol. 3, which dropped in August of 2020, is a feel-good, summertime album more rooted in pop than the hip hop/rap sounds of his first two albums. The album has since reached over 250 million global streams to date, featuring Jaden’s singles “Cabin Fever” and “Rainbow Bap,” as well as “Falling For You” with Justin Bieber. Jaden released his second album “ERYS” in July of 2019. The album features collaborations with his sister, Willow Smith, as well as Tyler the Creator, Trinidad James, ASAP Rocky, Lido and Kid Cudi. In support of the album, Jaden opened for Tyler the Creator’s tour IGOR alongside Blood Orange and Goldlink in the fall of 2019. Jaden wrapped the Willow & Erys North American Tour that he co-headlined alongside Willow in December 2019. Smith announced his project ‘The Sunset Tapes’ and new single ‘GOKU’ in the fall of 2018. The Sunset Tapes: A Cool Tape Story was later released in November of 2018. In November 2017 Smith released his album “SYRE” via his own MSFTS Music/Roc Nation label through their Interscope Records partnership. The album debuted in the Top 10 on Billboard’s Rap Chart Hip Hop / R&B Chart and as #23 on the Billboard 200. “SYRE” has surpassed 100 million streams on Spotify worldwide. Smith was named one of TIME’s Top 30 Influential Teens of 2017 and one of Pandora’s Artists to Watch of 2018. Smith dropped his album "Cool Tapes Vol. 2" in November 2014 exclusively on his app Jaden Experience. The app is the first to be released in a new platform that allows artists to distribute their music directly to their fans creating an album-like experience through a dedicated platform. His first mixtape “The Cool Café” was released in 2012. Smith has also hosted his own program on Apple Music’s Beats 1 radio show.

Born in Atlanta, GA, Mateo Arias (¿Téo?) is the son of Colombian parents and younger brother actor Moises Arias (Five Feet Apart, Monos). Mateo was brought up bilingual and is fluent in Spanish and English. Mateo discovered his love for the arts at an early age and would produce and star in various independent and studio films. In addition to being in front of the camera as a young actor, he simultaneously explored his love of music and soon discovered his voice would lead his creative path in a musical direction, producing original content as young as ten years old. Mateo's admiration for his culture and international background profoundly influences his music and explains his transcendent career worldwide. Since his debut single "Uno Dos " (2017) featured longtime friend and collaborator Jaden Smith, ¿Téo? has garnered millions of listeners and has captured audiences during his concert tours and in theaters - appearing recently in Sony's feature film Blast Beat (out now in select theatres), with his brother Moises, Colombian American star Kali Uchis, and Diane Guerrero (Netflix's Orange is the New Black) which premiered at the 2020 Sundance Film Festival. ¿Téo? has developed a genre that draws elements of Bossa-Nova, Hip Hop, and Alternative complemented by his very distinct and hypnotizing voice, a genre that he and his fans refer to as "Neo-American." ¿Téo? 's below-the-radar approach and mystique elements surrounding him have created a movement that follows him. His new album, Sol, represents ¿Téo? 's multi-faceted, all-encompassing approach to music and is highlighted by recent singles “Buzzed" (feat. Willow Smith), “What’s On Ur Mind" and “Suplicar," the latter of which has quickly garnered millions of independent streams.

Rotating between an arsenal of instruments and singing with spotlight-grabbing swagger, Eddie Benjamin brings a flourishing kaleidoscopic color to popular music. The 19-year-old Australia-born, Los Angeles-based singer, songwriter, multi-instrumentalist, and producer channels fresh fire through a classic approach. Playing in jazz clubs since he was in grade school with players more than twice his age, he later sparked a buzz online, sharing viral covers generating millions of views, these uploads soon caught the attention of fellow Australian native, Sia. Moving to Los Angeles shortly after, he found himself in the studio working on major releases behind-the-scenes. He has quietly become the ultimate “secret weapon” for some of the biggest superstars in the world as Sia, Meghan Trainor, Ryan Tedder, Labrinth, and even Earth, Wind & Fire have all called on him to collaborate, entrusting him as a creative voice. Over the past year, he turned heads with Justin Bieber, who dubbed him “the next generation” and the next up to “crush the world.” Justin also featured Eddie prominently in his documentary “Justin Bieber: Next Chapter.” Now with his first official project Emotional out in the world, which enlisted Sia as a feature on the alluring single “Diamond Eyes”, Eddie has his sights on releasing his debut album.

A creative soul and global citizen, Harry Hudson is a pop star with a distinct maturity, unwavering self-assurance and a refined worldliness most never achieve until far later in life. He’s channeled that roller coaster of an emotional experience into supremely visceral and boundary-shattering alternative/pop music and says he views the world around him with open eyes like never before. Harry is a multi-faceted visionary, who is fast becoming one of the music industry’s most intriguing voices. In 2018, he released his single “Yellow Lights,” which has been streamed more than 28 million times on Spotify and reached the Top 10 on the platform’s U.S. Viral Chart, off his critically acclaimed debut album, Yesterday’s Tomorrow Night. His new project, Hey, I’m Here For You, is a highly personal, soul-infused batch of pop music released via a joint partnership between Roc Nation and his close friends, Jaden and Willow Smith’s MSFTS Music. 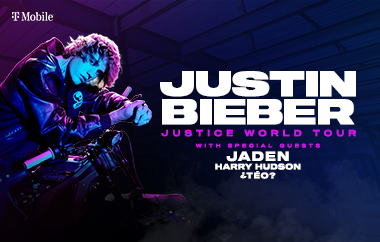