“Hugh Jackman…is the last of a dying breed:

“…special guest Keala Settle…made her Hollywood Bowl debut with a powerhouse performance that resulted in a standing ovation.” – Variety

PHILADELPHIA, PA (July 31, 2019) – Actress, singer and Tony Award Nominee Keala Settle will perform on the 12 North American dates of Hugh Jackman’s live tour of The Man. The Music. The Show. beginning with the Oct 1 performance in Boston’s TD Garden arena, making a stop at Wells Fargo Center on Oct 2 and ending Oct 19 and 20 in Mexico City’s Arena Ciudad de México.  Settle, who earned standing ovations when she appeared on-stage with Jackman earlier this month at the Hollywood Bowl and Madison Square Garden, will perform the Academy Award® nominated and Golden Globe Award winning song “This Is Me” from The Greatest Showman and more.

“It is such an honor every time I have been asked to perform with Hugh Jackman and the incredibly talented cast that he has assembled for this once-in-a-lifetime tour,” said Settle.  “I have never met a more generous and gifted artist than Hugh and I certainly jumped at the opportunity to join him to perform before the greatest audiences I have ever been around.”

Show highlights and fan favorites include Jackman performing hit songs from The Greatest Showman, Les Misérables and more from Broadway and film, accompanied by a live 16-piece orchestra.  For ticket information for remaining North American shows, go to www.hughjackmantheshow.com

Throughout his career which spans four decades, Hugh Jackman has made an impression on audiences of all ages with his multi-hyphenate career persona, as successful on stage in front of live crowds as he is on film. From his award-winning turn on Broadway as the 1970s singer/songwriter Peter Allen, to his metal claw-wielding Wolverine in the blockbuster X-Men franchise, Jackman has proven to be one of the most versatile actors of our time.

Jackman garnered his first Academy Award® nomination, for Best Actor, for his performance in Tom Hooper’s Les Misérables, based on the popular stage show created from Victor Hugo’s famous novel of the same name. Jackman’s standout performance as protagonist Jean Valjean also earned him a Golden Globe Award for Best Actor in a Comedy/Musical, as well as Screen Actors Guild (SAG) Award® nominations, for both Best Ensemble and Best Male Actor in a Leading Role, and a BAFTA Award nomination. Most recently, he was nominated for his role as P.T. Barnum in The Greatest Showman.

Actress and singer Keala Settle is the breakout star of 20th Century Fox’s, The Greatest Showman, alongside Hugh Jackman. The Hawaii native’s performance of the film’s Oscar-nominated song “This Is Me” became an explosive anthem of self-acceptance, propelling the soundtrack to the top of the charts worldwide. Her performance at the 2018 Academy Awards brought the entire audience to their feet with a performance that The New York Times applauded as “commanding” and a perfect summation of “what became the themes of the night – diversity, empowerment, [and] inclusion.”

Tickets are on sale and a limited number of exclusive VIP packages are available for purchase. These exclusive offers can include an amazing selection of reserved-seated tickets, custom merchandise (designed exclusively for package purchasers) and much more.  For more information please visit HughJackmanTheShow.com. 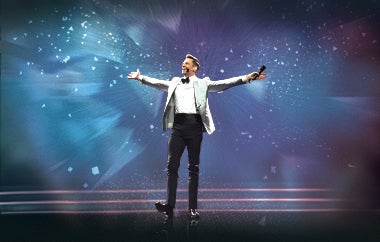