SHOW TO INCLUDE SPECIAL GUESTS MATT OX AND PAZ

TICKETS GO ON SALE FRIDAY, JULY 26 AT 10 A.M. THROUGH WELLSFARGOCENTERPHILLY.COM

PHILADELPHIA, PA (July 24, 2019) – World-renowned DJ Martin Garrix is set to headline an outdoor concert featuring special guests Matt Ox and PAZ at the Wells Fargo Center complex on Saturday, September 28. The outdoor show, which will be hosted by Wells Fargo Center, will kick off the 2019 Overwatch League™ Grand Finals weekend, and precede the main event taking place at the arena the following day, Sunday, September 29.

Tickets go on sale Friday, July 26 at 10 a.m., online at WellsFargoCenterPhilly.com, by phone at 1-800-298-4200, or in person at the Wells Fargo Center box office. VIP Packages to include: access to VIP only general admission pit for the mainstage, access to VIP only cash bar, commemorative VIP laminate, VIP fast lane entry & on-site host. Tickets for the 2019 Overwatch League Grand Finals are available for purchase now.

Martin Garrix has risen to global stardom in pop as well as electronic circles – and yet he’s far from being done. Dance music’s freshest talent has headlined festivals around the globe, founded a label and mentored other artists and won the #1 spot in DJ Mag’s Top 100 three times in a row.

Garrix’ musical achievements have not gone unnoticed. They were awarded with two MTV EMAs in 2016, holding the #1 spot in the 2017 and 2018 DJ Mag Top 100, a ‘Man of Today’ accolade from GQ, a spot among Forbes’ ’30 Under 30’ and another at Billboard’s ‘EDM Power Players’. Last but not least, he performed at Jimmy Fallon’s The Tonight Show twice, as the first Dutch guest ever and also used his guitar for an unplugged version of ‘Dreamer’ with MIKE YUNG on Good Morning America.

A naturally outgoing person and a born entertainer, Martin has also been a welcome guest at some of the world’s most important stages. He has headlined at festivals that most musicians can only dream of including Coachella, Tomorrowland, Lollapalooza and Ultra Music Festival. Next to that, he also locked down residencies at two of the world’s most prestigious clubs: Ushuaıä Ibiza and Omnia Las Vegas.

Garrix continues to produce diverse sound, most recently with his 2019 releases, ‘No Sleep’ and the summer smash ‘Summer Days’ with Macklemore and Patrick Stump of Fall Out Boy. 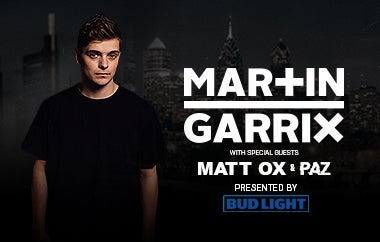