Massive excitement from Genesis fans continues to push The Last Domino? North American Tour to add more dates on top of new shows added just a few days ago in Chicago, Montréal, and New York. Genesis today has announced a 2nd and final show in Philadelphia at Wells Fargo Center on December 3, 2021. Tickets go on sale Friday, May 14 at 10:00am ET. Visit www.genesis-music.com for tour, ticket, and official VIP package information.

The Last Domino? North American Tour 2021 marks the first time Genesis has performed stateside since 2007’s Turn It On Again: The Tour which went on to be one of the biggest grossing tours of that year playing sold out arenas and stadiums around the world. One of the most successful and legendary rock bands of all-time, Genesis has sold more than 100 million albums with numerous top 20 hits including “Invisible Touch,” “In Too Deep,” and “Turn It On Again,” while also being inducted into the Rock & Roll Hall of Fame in 2010.

Genesis The Last Domino? North American Tour 2021 is promoted by EMC Presents by arrangement with Solo and Tony Smith Personal Management. The Philadelphia engagement is being promoted locally in collaboration with Larry Magid Entertainment Group.

EMC Presents is a partnership between CTS Eventim, one of the leading international providers of ticketing services and live entertainment, and award-winning tour promoter and producer Michael Cohl. The mission behind this collaboration is to create extraordinary shows and experiences for fans worldwide. For more information, visit: www.emcpresents.com. 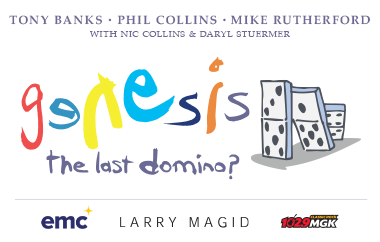