Maxwell and Mary J. Blige Bring 'The King and Queen of Hearts World Tour' to Wells Fargo Center on November 9

Tickets will go on sale on Friday, September 9 at 10 a.m. exclusively through WellsFargoCenterPhilly.com, by phone at 1-800-298-4200 or in person at the Wells Fargo Center box office.

Maxwell's ‘blackSUMMERS’night’ was released on July 1 (Columbia Records), and is being talked of as one of the most acclaimed albums of 2016. It’s the second installment of his Grammy-winning and critically acclaimed musical trilogy, and Pitchfork calls it "exquisite and transcendental...[his] most cohesive effort." The soul star has been on the road since June, playing shows across the U.S. and appearing on ‘Good Morning America,’ ‘Jimmy Kimmel Live!,’ ‘The BET Awards,’ ‘Tavis Smiley’ & more. Maxwell’s “evocative” (Billboard) headlining set at this year's Essence Festival showcased a voice with “impressive tenderness” (USA Today) and a “velvet falsetto” (New Orleans Times-Picayune)

Maxwell says, “Mary is the epitome of soul. She embodies all that is woman and speaks for the everyday struggle and triumphs of all women. I can’t wait to get on the road with her."

Blige says, "Maxwell's music is amazingly soulful and calm with a colorful tone that speaks to the hearts of women. His music makes them feel loved and I'm excited to get on the road with him." 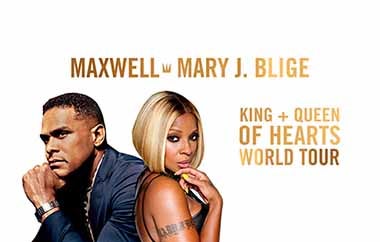