Tickets will go on sale on Friday, May 5 at 11 a.m. exclusively through WellsFargoCenterPhilly.com, by phone at 1-800-298-4200, or in person at the Wells Fargo Center box office.

The band will embark on a 20-city North American fall arena tour in support of their most recent album MANIA. MANIA is the follow-up album to the band’s platinum-certified sixth studio album American Beauty/American Psycho, which debuted at #1 on the Billboard Top 200 upon its January 2015 release. Hailing from Chicago, Grammy-nominated Fall Out Boy – Patrick Stump (vocals/guitar), Pete Wentz (bass), Joe Trohman (guitar) and Andy Hurley (drums) – has appeared on the cover of Rolling Stone and other prestigious publications. They have performed on Saturday Night Live, The Today Show, America’s Got Talent, The Voice, Late Night with Jimmy Fallon, The Tonight Show with Jay Leno, Conan, The Late Show with David Letterman, Jimmy Kimmel Live! and many more. More information can be found at www.falloutboy.com 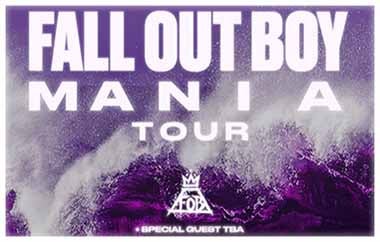