GRAMMY®, TONY®, and EMMY® Award-winning pop superstar Barry Manilow will take the stage at Wells Fargo Center in Philadelphia in celebration of his newest album, “This is My Town: Songs of New York,” #1 on U.S. Pop Album Chart, on  Friday, September 15.  Manilow will perform his greatest hits like “Copacabana” and “Mandy” as well as songs from his new album.

Tickets go on sale to the general public on Friday, July 14  at 10 a.m. and will be available at WellsFargoCenterPhilly.com, venue Box office or by-phone. Tickets and general information are also available at www.manilow.com.  Do not miss the chance to hear the legend in person!

Barry Manilow's unparalleled career encompasses virtually every area of music, including performing, composing, arranging and producing. A Songwriters Hall of Fame inductee, Manilow has triumphed in every medium of entertainment.  With worldwide record sales exceeding 85 million, Barry Manilow is ranked as the top Adult Contemporary chart artist of all time with over 50 Top 40 hits. 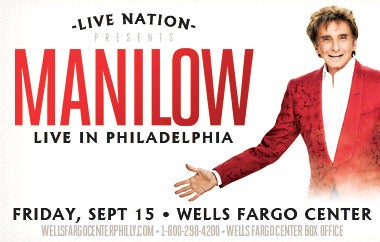