Tickets will go on sale on Saturday, May 20 at 10 a.m. exclusively through WellsFargoCenterPhilly.com, by phone at 1-800-298-4200, or in person at the Wells Fargo Center box office.

Featuring professional basketball’s first four-point shot, BIG3 games will be packed with highly skilled, intensely competitive matchups in the world’s most popular form of basketball – 3-on-3.  The winning team will be the first to score 60 points.  BIG3 games highlight the biggest basketball superstars competing at the highest competitive level.  The league structure encourages this incredibly competitive group of players to vie for a revenue share based on final league standings.

South Philadelphia native and former La Salle University basketball player Rasual Butler is also set to participate in the BIG3 games. Butler was inducted into the La Salle Hall of Athletes in 2008. Butler was selected by the Miami Heat with the 53rd pick of the 2002 NBA draft. After three seasons, he was traded to the New Orleans Hornets as part of the largest trade in NBA history. The four-team trade involved the Memphis Grizzlies, Miami Heat, Boston Celtics, and Utah Jazz, and featured thirteen players, most notably Eddie Jones, Antoine Walker, Jason Williams and James Posey. Butler was selected by the ‘Ball Hogs’ (team run by Brian Scalabrine) tenth overall in the BIG3 Draft.

BIG3 has partnered with CID Entertainment to offer 3 levels of VIP Experiences, which all include premium seating at the game. VIP Experiences are tailored for the ultimate basketball fan with exclusive amenities such as access to a private suite with appearances by select coaches, captains, and players, the opportunity to shoot hoops before the games with the team of your choice, and exclusive merchandise. To view all available VIP Experiences, please visit CID Entertainment.

Each Sunday this summer, BIG3 will bring competitive 3-on-3 half-court basketball to a different city throughout the country, including basketball hot beds Brooklyn, Charlotte, Tulsa, Philadelphia, Dallas, Lexington (Ky.), Los Angeles, Seattle and Las Vegas.  Fans will have the opportunity to experience four high-energy match-ups and witness over 40 of the sport’s most skilled competitors battle for the title of 2017 BIG3 Champions.

The full season schedule is available at BIG3.com. 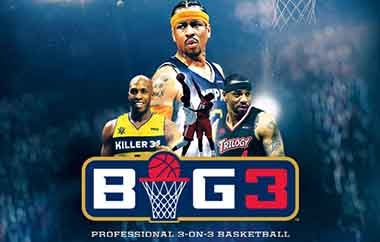