PHILADELPHIA, Pa. (March 6, 2018) – The Philadelphia Rebels of the North American Hockey League (NAHL) are offering a unique ticket package giving fans the opportunity to skate on the Philadelphia Flyers ice after their match-up against the Wilkes-Barre/Scranton Knights at Wells Fargo Center on Saturday, March 10.

The NAHL set a new single-season NCAA record last year with 305-plus commitments, and the Rebels had 12 commit to Divison I programs. Head coach Joe Coombs has built a tier-II junior hockey powerhouse over the past two years. Last season, the Rebels finished with the NAHL’s best regular-season record, advancing to the championship game of the Robertson Cup in Duluth, Minnesota. The team is currently in first place in the NAHL's East Division.

The Flyers are set to face off against the Winnipeg Jets at 1 p.m. at Wells Fargo Center on March 10. 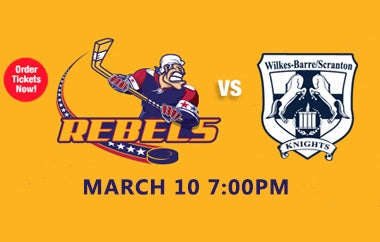