Tickets will go on sale on Saturday, March 4 at 10 a.m. exclusively through WellsFargoCenterPhilly.com, by phone at 1-800-298-4200 or in person at the Wells Fargo Center box office.

Mendes is touring in support of his sophomore album Illuminate (Island Records), which debuted at #1 on the Billboard 200 chart and features hit singles “Treat You Better” and “Mercy.” “Mercy” has been certified Platinum and has reached Top 20 on the Billboard Hot 100 chart, and is currently Top 10 on pop radio and rising. Illuminate was received with critical acclaim, featuring on The Los Angeles Times’ 10 Best Albums of 2016 and at #5 on The Associated Press’ Top Albums of 2016, with Billboard declaring “it is becoming clear that Mendes found his true calling at a young age, with Illuminate marking the beginning of the next exciting chapter for the artist.”

Puth is currently working on the highly anticipated follow-up to his wildly popular debut album Nine Track Mind, which saw massive global success this past year with several multi-Platinum singles including “See You Again,” “Marvin Gaye,” “One Call Away” and “We Don’t Talk Anymore.” 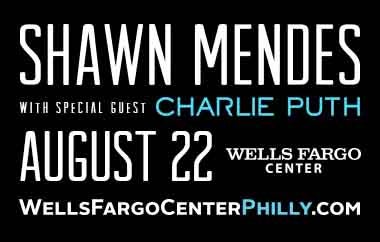