The Princeton Tigers are part of the Ivy League and ECAC Hockey, one of the nation’s premier Division I Men’s Ice Hockey Conferences. One of the founding collegiate hockey teams, the program won three intercollegiate national championships in the early 1900s and has claimed four Ivy League titles and two ECAC Hockey Championships in 1998 and 2008. Tigers’ Head Coach Ron Fogarty leads all active NCAA coaches in win percentage. Princeton has had 12 players continue their careers in the NHL, including Andre Faust ’92 and Darrol Powe ’07 both of whom played for the Philadelphia Flyers. The latest player Mike Condon ’13 was the starting goaltender for the Montreal Canadiens this past season and backstopped the U.S. Team to a bronze medal at the 2016 World Championships. Princeton’s most notable hockey alum is Philadelphia area native Hobey Baker, a legend in the game for whom the Hobey Baker Trophy is named and given annually to the best collegiate hockey player is named.

Penn State, making their fifth consecutive appearance on the Wells Fargo Center ice, is entering its fifth year as an NCAA Division I ice hockey program and its fourth year in the Big Ten Hockey Conference. The Nittany Lions tallied a record 21 wins during the 2015-16 season, with a 12-5-1 home record. Head Coach Guy Gadowsky, the 2014-15 Big Ten Coach of the Year, guides the Nittany Lions in his 18th collegiate season.

Penn State Head Coach Gadowsky, who previously coached Princeton for seven seasons (2004-11) takes on his old team and new rival for a sure-to-be emotional game. In his first five years as head coach, the Tigers improved their win total in each season. In 2008-09, Princeton captured a program-record 22 victories and earned its second straight NCAA tournament appearance. While at Princeton, Gadowsky had more than 20 players go on to sign professional contracts.

Hosting high caliber hockey events and programs to grow the sport of hockey in Greater Philadelphia is no new concept to Comcast Spectacor and the Philadelphia Flyers. Over the last few years, Comcast Spectacor has successfully hosted the 2014 NHL Draft, the 2014 NCAA Frozen Four, the 2012 NHL Bridgestone Winter Classic, the 2010 Stanley Cup Final and a number of college and professional hockey games. 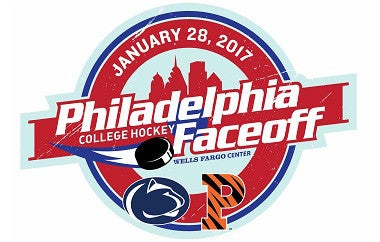