Q102's Jingle Ball Presented by Capital One ON SALE NOW

Tickets go on sale on Saturday, October 17 at 12 p.m. exclusively through WellsFargoCenterPhilly.com, by phone at 1-800-298-4200 or in person at the Wells Fargo Center box office.

“Jingle Ball is one of the most recognized brands in the country featuring an unrivaled line up of the biggest names in music," said Jared Fallon, Program Director for Q102. "We’re excited to once again share this incredible music event with Q102 listeners."

Every year, Q102’s Jingle Ball gives back to the community to celebrate the holiday season.  This year’s official charity for Q102’s Jingle Ball2016 is the Ryan Seacrest Foundation – $1.00 of each ticket sold will be donated to the non-profit organization, which is dedicated to inspiring today’s youth through entertainment and education focused initiatives.

“The Ryan Seacrest Foundation is honored to team up with the iHeartRadio Jingle Ball Tour for its fourth consecutive year, allowing us to continue to support the children’s hospitals we partner with across the country,” said Meredith Seacrest, Executive Director & COO of the Ryan Seacrest Foundation. “We are thankful to iHeartMedia for helping our foundation create an uplifting environment and positive distraction for patients and their families through our Seacrest Studios and its programming.”

Q102 is a leading media outlet in the Philly market and its programming and content are available across multiple platforms, including its broadcast stations; online via its branded digital sites; mobile; and social, with nationwide listening through iHeartRadio — with more than a billion downloads, more than 85 million social media followers and 90 million registered users. 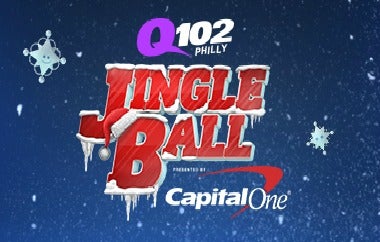