SportsRadio 94WIP’s Wing Bowl, which has become one of the most famous annual radio events in the world, returns to the Wells Fargo Center on Friday, February 3rd, 2017 at 6 a.m. Wing Bowl 25 will feature an appearance by special guests, professional wrestler  Ric Flair and Grammy Award winning artist Coolio.  Tickets for the 25th annual competitive chicken wing eating event are $12.50 and go on sale Tuesday, December 13 at 9 a.m. online at WellsFargoCenterPhilly.com, by calling 1-800-298-4200 or in person at Wells Fargo Center.  Wing Bowl 25 is proudly presented by Steven Singer Jewelers.  Partial proceeds from WIP's Wing Bowl 25 will benefit the Philadelphia Fraternal Order of Police Survivor’s Fund.

WIP is proud to welcome Ric Flair as the special guest at Wing Bowl 25.  Ric Flair® is a celebrity and professional wrestler. Also known as the “Nature Boy®," Flair is among the most famous and well-known wrestlers in the world, and has been one of wrestling's biggest stars since the late 1970s. Flair was often popular with the crowd due to his in-ring antics, including rule breaking (earning him the distinction of being "the dirtiest player in the game"), his cocky interview style, strutting and his shouting of "WOOOOO!™" The "WOOOOO!" yell has since become a tribute to Flair, and is often shouted by the crowd whenever they see Ric or when another a wrestler performs one of Flair's signature moves.   A Facebook and Twitter favorite, YouTube sensation, and whose name returns almost 4 million Google hits in under .2 seconds, Ric Flair® is an international icon. At 6’ 1”, 243 pounds and hailing from Charlotte, NC, his signature move is the Figure-Four Leglock.  His career highlights include 16 time World Heavyweight Champion, WCW World Heavyweight Champion, WWE Champion, and United States Champion.
Also appearing at Wing Bowl 25 will be Coolio, performing a set of his hit songs.  With over 17 million records sold worldwide, Grammy award-winning and multi-platinum recording artist Coolio is an artist known around the world as a musical and cooking master of extraordinary

reinvention. Coolio initially took over the world rap scene through the “Gangsta’s Paradise” release, which won a Grammy Award in 1996 for Best Rap Performance, Solo. “Gangsta’s Paradise,” was also nominated for a Grammy for Best Song of the Year, selling over six million copies and was Billboard Magazine’s number one single in 1995.

WIP's Wing Bowl 25 will be broadcast live on 94WIP.  The contest will also be streamed live over the Internet at Wingbowl25.com as well as through the Radio.com app on a variety of mobile devices.

WIP Morning Show co-host Al Morganti, who co-founded Wing Bowl 25 years ago with host Angelo Cataldi said, “It’s amazing that Wing Bowl is still around 25 years later and has become this big. We have a duty to make this one the biggest and the best, so that’s what we’ll do."

Wing Bowl is always a competition of eating and this year will be no different. Eaters will compete for amazing prizes including cash, a car and a motorcycle. With all former Overall Champions barred from this year`s contest, Wing Bowl 25 guarantees to crown a new champion. Also new for this year is the Wing Bowl “Legends” Division where up to 10 former participants that have not won the contest but made significant contributions to the event will get the opportunity to eat for “Wing Bowl Immortality”.

PJ Whelihan’s is the official supplier of wings for WIP Wing Bowl 25, their tenth consecutive year as sponsor and supplier.

Further details can be found at www.WingBowl25.com.

Contestants are selected based on their ability to complete challenging eating stunts featured during the SportsRadio 94WIP Morning Show, heard weekdays from 5:30-10:00 AM, or on-site "Wing-Offs" held throughout Philadelphia Area.  Contestants can propose stunts online at www.Wingbowl25.com/eater or call the WIP Morning Show at 1-888-729-9494. 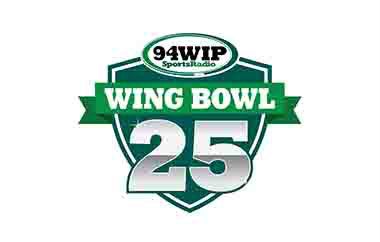