Sugarhouse Casino and Playsugarhouse.com have become the Official Sportsbook Partners for the Philadelphia Flyers and Wells Fargo Center 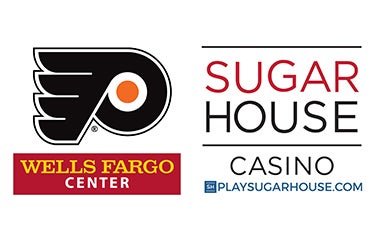 The multi-year deal includes two branded, hi-tech sports lounges inside the Wells Fargo Center that will open in time for the Flyers’ 2019-2020 season opener on October 9th. Sports fans can watch the Flyers and other live events across the spectrum of sports on nearly 100 screens throughout the lounges, all while betting on the action via their mobile devices.  The look and feel of the sportsbook-style lounges will be the same as the brand-new permanent sportsbook at SugarHouse Casino, created by the same designer.

“With Pennsylvania on the forefront of legalized sports gaming, we and our SugarHouse partners are excited to elevate the game day experience at the Wells Fargo Center in a unique way,” said Camillo. “These new lounges will bring the energy and excitement of PlaySugarHouse.com, a market-leading sportsbook, into the arena and introduce another step in our transformation to become one of the most technologically-advanced arenas in the world.”

The agreement also forges a marketing partnership that includes advertising inside the arena’s bowl and throughout the concourse as well as radio, billboards and digital media placements. The Wells Fargo Center is in the midst of “Transformation 2020,” a $265 million initiative that is re-inventing the arena’s live event experience through a series of major upgrades, including a massive new scoreboard, an all-inclusive event-level VIP club, and complete redesigns of both levels housing these sportsbook-style lounges.

“We are thrilled with this sponsorship deal to become the official sportsbook of the Philadelphia Flyers and Wells Fargo Center,” said Mattias Stetz, COO of Rush Street Interactive, the operator of SugarHouse in-casino and online sportsbooks.  “Philly has some of the best sports fans in the country, and we look forward to hosting them in our sports lounges at the stunning Wells Fargo Center.”

“Philadelphia fans’ interest in sports betting is why we’re expanding our state-of-the-art SugarHouse Sportsbook this fall,” said Rob Long, general manager of SugarHouse Casino. “We can’t wait to bring the same energy that we’ve seen at the casino to these brand-new sports lounges at the Wells Fargo Center.”

The sportsbook-style lounges will be in two locations in the building – both on the Main Concourse and on the arena’s top level.  The nearly 6,500-square-foot-lounge located on the arena’s top level will face the bowl so fans can watch the live action as it happens. The fun and open sportsbook-like environment will also feature other spaces for fans to cheer on the action while betting online and enjoying Philly’s favorite foods and drinks.  Each space features club chairs, bar and table seating, as well as a custom 22 feet long by eight feet tall LED video wall that will anchor the viewing area, which has its own dedicated seating area.  There are also dozens of live action screens, measuring 86”, 65”, and 50”, respectively.

The Main Concourse level lounge is located in the completely redesigned south end of the arena and is approximately 5,680 square feet.  This exciting space features 10, 86” screens grouped throughout the seating areas, mixed with odds boards and an additional 16, 65” monitors at the bar.  SugarHouse ambassadors will also be in both lounges to assist guests in registering for the online sportsbook so they can get in on the action.

As previously announced, SugarHouse Casino, along with its online and mobile complements, is rebranding as Rivers Casino Philadelphia, later this year.  The sports lounges at Wells Fargo Center will reflect the new Rivers brand.  The $15 million dollar rebranding investment also includes the new on property sportsbook.

Founded in 2012, Chicago-based Rush Street Interactive (RSI) launched its first betting site, PlaySugarHouse.com, in New Jersey in September 2016.  The company subsequently made history by becoming the first operator in the United States to offer a fully integrated online sportsbook and casino.  In addition to being the first to launch a legal sportsbook in the state of New York (at Rivers Casino in Schenectady) and a legal online sportsbook in the state of Pennsylvania (at PlaySugarHouse.com), RSI was also the first US-based gaming operator to launch a legal and regulated online sportsbook in Latin America (at Rusbhet.co in Colombia).  Rush Street Interactive is also the developer and operator of a leading social gaming platform currently deployed at the group’s affiliated land-based casinos, as well as selected third party partners.  Rush Street Interactive was named “Mobile Operator of the Year” in North America at the EGR North America Awards 2019 and “American Operator of the Year” & “Casino Operator of the Year” at the American Gambling Awards in 2019. For more information, visit rushstreetinteractive.com.

Located along the Delaware Riverfront in Philadelphia, SugarHouse Casino features 1,755 slots, 105 table games, 62 hybrid gaming seats, a 28-table poker room and a designated Sportsbook area for live sports betting. The casino offers eight distinctive restaurants and bars — among them are Hugo’s Frog Bar & Chop House, Tacconelli’s Pizzeria, Saxbys and Geno’s Steaks — riverfront views, live performances in The Event Center, free parking, and promotions and giveaways daily. SugarHouse, which opened in 2010, employs approximately 1,600 Team Members and has been voted a great place to work in Philadelphia. SugarHouse Casino is owned and operated by Rush Street Gaming and its affiliates. For more information, visit SugarHouseCasino.com.