UFC® will return to Philadelphia for the first time since 2011 with a bout guaranteed to deliver fireworks, as No. 6 ranked lightweight contender Edson Barboza takes on No. 7 Justin Gaethje. In a pivotal strawweight bout, No. 6 ranked contender Karolina Kowalkiewicz faces No. 8 Michelle Waterson. UFC FIGHT NIGHT® ON ESPN: BARBOZA vs. GAETHJE takes place at the Wells Fargo Center on Saturday, March 30.

A devastating Muay Thai specialist, Barboza (20-6, fighting out of Rio de Janeiro, Brazil) has delivered some of the most spectacular knockouts in UFC history. During his run, he has earned thrilling wins against Beneil Dariush, Gilbert Melendez, Anthony Pettis and Paul Felder. He now looks to continue building on the momentum of his recent victory over Dan Hooker with another show-stealing performance against one of the division’s most aggressive finishers.

Known as the “The Highlight,” Gaethje (19-2. Fighting out of Arvada, Colo.) has proven to be must-watch television since joining the UFC in 2017. He has earned five performance bonuses in only four appearances, including legendary wars with Dustin Poirier and Eddie Alvarez, as well as incredible knockouts against James Vick and Michael Johnson. Gaethje is now poised to once again steal the show against one of the most dangerous strikers on the UFC roster.

A former title challenger, Kowalkiewicz (13-3, fighting out of Lodz, Poland) aims to reassert herself as one of the top competitors in the strawweight division. During her UFC run, she has netted impressive victories over current champion Rose Namajunas, Felice Herrig, Randa Markos and Heather Jo Clark. Kowalkiewicz now hopes to make a statement against a tough and surging veteran contender.

Currently riding a two-fight win streak, Waterson (16-6, fighting out of Albuquerque, N.M.) looks to continue her ascent up through the rankings. A former Invicta champion, she has secured thrilling victories against Paige VanZant, Felice Herrig, Cortney Casey and Jessica Penne. She is now gunning to establish herself as a title threat in the talent-rich strawweight division.

Announced bouts on the card include:

For the latest information on additional bouts for this event, please visit www.ufc.com. All bouts live and subject to change. 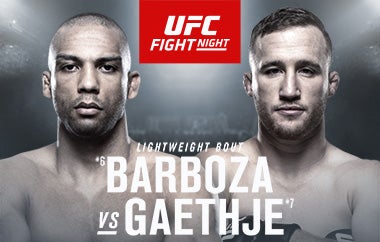