"Gymnastics fans across the nation will get to see the biggest names in the sport at the Kellogg’s Tour of Gymnastics Champions," said Steve Penny, president of USA Gymnastics. “The Kellogg’s Tour is always a lot of fun and a great way for Americans to celebrate the athletes’ performances at the Olympic Games.”

Tickets will go on sale on Thursday, June 23 at 10 a.m. exclusively through ComcastTIX online at ComcastTIX.com, by phone at 1-800-298-4200 or in person at the Wells Fargo Center box office.

At each Tour stop, a limited number of VIP packages will be available and include a pre-show Olympian Chalk Talk led by 2008 Olympic all-around champion Nastia Liukin, along with selected members of the 2016 U.S. Olympic Gymnastics Team; seats in the first few rows; and a post-show autograph session.  Platinum tickets, also available in each market, include the pre-show Olympian Chalk Talk.

Tickets are offered in selected markets, with additional cities becoming accessible on a daily basis. A discount ticket program for gymnastics clubs will be available in every market, with club incentives based on ticket sales.  Gym clubs can contact the arena for additional details and to secure tickets.

The Kellogg's Tour of Gymnastics Champions is produced by USA Gymnastics in partnership with AEG Facilities. The Kellogg Company is the exclusive title sponsor. 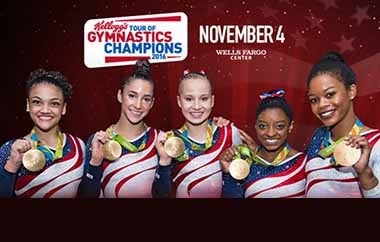