Rapper Vic Mensa is set to join rap superstar Jay Z as a special guest during his 4:44 Tour stop at Wells Fargo Center on Friday, December 1.

Tickets are on sale now exclusively through WellsFargoCenterPhilly.com, by phone at 1-800-298-4200 or in person at the Wells Fargo Center box office.

This past summer, the Chicago rapper released his highly anticipated debut album The Autobiography on Roc Nation Records, of which FORBES proclaimed, “Vic Mensa is on his way to rap stardom.”

As a founding member of the SAVEMONEY music collective, Vic Mensa first released his breakthrough mixtape Innanetape in 2013. He has since collaborated with music heavyweights from Kanye West, Pharrell, Skrillex, Weezer, Chance the Rapper and more. 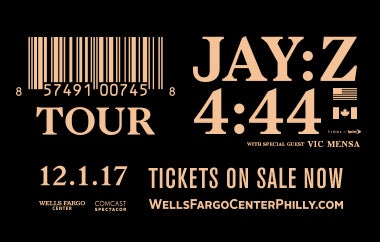