Tickets for the event will be available Friday, December 13 at 10 a.m. online at WellsFargoCenterPhilly.com, by phone at 1-800-298-4200, or in person at the Wells Fargo Center box office.

WWE Elimination Chamber will see Superstars from Monday Night RAW and Friday Night SmackDown in exciting action. **Card to be announced at a later date.

Currently in the midst of Transformation 2020, a multi-year $265 million renovation initiative, Wells Fargo Center is reinventing the live event experience for every fan that walks through its doors. To learn more about Wells Fargo Center visit www.wellsfargocenterphilly.com or follow us on Twitter, Facebook, and Instagram 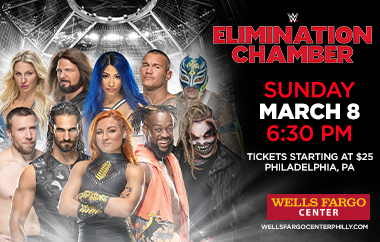